Bill was born in Rutland and graduated from Rutland High School in 1969.

After receiving a History degree from the University of Vermont in 1973, he received his J.D. from the Boston University School of Law in 1976.

Shortly after graduation, he joined his father, Robert Bloomer and his uncle, John Bloomer in the practice at Bloomer & Bloomer.

He has been involved as a coach within the Rutland Recreation Department and Rutland Public Schools, including coaching all of his children at some point. He has also served on the boards of several area non-profits. Bill now enjoys teaching Business Law at Castleton University.

He currently lives in Rutland with his wife, Margery. They have four children (Matt, Kate, Aaron & Geoff) and four grandchildren (Jake, Will, Zach and Beatrice). 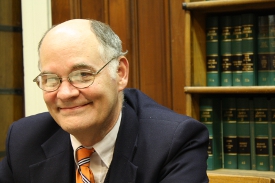 United States District Court for the District of Vermont